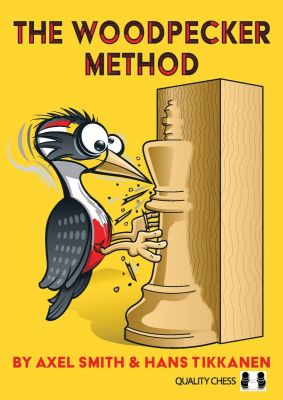 The Woodpecker Method is the name given by Axel Smith to a training system developed by his compatriot and co-author Hans Tikkanen. After training with his method in 2010, Tikkanen achieved three GM norms within a seven-week period.

The quick explanation of the Woodpecker Method is that you need to solve a large number of puzzles in a row; then solve the same puzzles again and again, only faster. It’s not a lazy shortcut to success – hard work is required. But the reward can be re-programming your unconscious mind. Benefits include sharper tactical vision, fewer blunders, better play when in time trouble and improved intuition.

This book contains everything you need to carry out your own Woodpecker training. Smith and Tikkanen explain how to get the maximum benefit from the method, before presenting over 1100 puzzles and solutions, all of which have been checked and double-checked for accuracy and suitability.

GM Axel Smith is the award-winning author of Pump Up Your Rating and e3 Poison, both of which were enthusiastically received by readers and reviewers. Using the Woodpecker as part of his training, as an adult he improved from a rating of 2100 to becoming a Grandmaster.

GM Hans Tikkanen is a four-time Swedish Champion whose live rating peaked over 2600. His interest in chess-improvement methods, and how they work, led him to study for a degree in psychology.