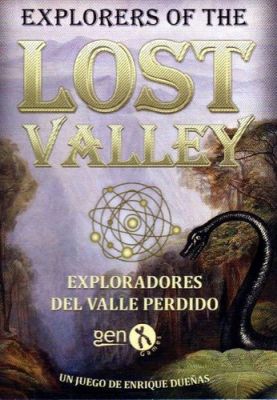 EXPLORERS OF THE LOST VALLEY

Add to Wish List
SKU
GNX181603
Barcode:
8437010181603
€10.99
Out of stock
Details
The life of an English gentleman can be quite boring sometimes, with all that privilege and comfort. That's why a group of old friends have decided to leave their mansions and enter into the dark depths of an unexplored region of África. There, they will find living, breathing dinosaurs!

The adventurers put together a little competition: Using their wits and modern weapons, they will try to catch alive as many animals as possible for the London zoo. The loser will have to shave off his moustache. Some emotion, at last!

Explorers of the Lost Valley is a card game for 2-4 players with a playing time of 20 minute per game. Two cards are drawn from the deck, showing a wide variety of scientifically inaccurate dinosaurs. The players can decide which one to fight, or discard one of them. If you decide to fight, roll the dice; if the result is equal or higher to the difficulty of the dinosaur, you can take it as a prize. The easier-to-catch dinosaurs give fewer points than the more difficult ones. If you fail, you lose some \"explorations points\". If you lose all your explorations points, you can continue playing (losing all your prizes), or you can stop playing (keeping the dinosaur you caught).

When the last card is drawn, the player with the most points wins!