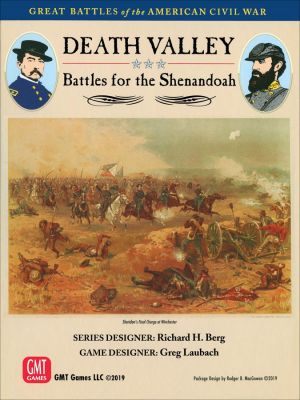 "Death Valley: Battles for the Shenandoah" is the seventh installment of the Great Battles of the American Civil War (GBACW) series, published by GMT Games.

Death Valley: Battles for the Shenandoah contains eight battle games with multiple scenarios. They range from division level contests on half sized maps to two map battles between armies. Experienced players will be able to play many of the scenarios in one sitting. The rules compare the development of the cavalry, and the changes in infantry and artillery organization and tactics in 1862 and 1864.

This series is one of the hobby’s longest-lived design concepts, springing from the legendary regimental level Gettysburg game – Terrible Swift Sword (SPI) – designed by Richard Berg in 1976. Under GMT, the rules system has remained stable, but has shown remarkable flexibility to allow each game to smoothly incorporate additional rules to reflect the historical battles. The series relies on interactive chit-pull mechanics to simulate the oftentimes-chaotic nature of the 19th Century battlefield at the regimental level.

Changes have been made to the series rules for Death Valley in order to enhance their clarity and simulation value. Veteran players will find the revised rules to be very familiar, with the main differences being in the user-friendliness of the rulebook, as well as how the game "feels", especially for players versed in Civil War tactics.