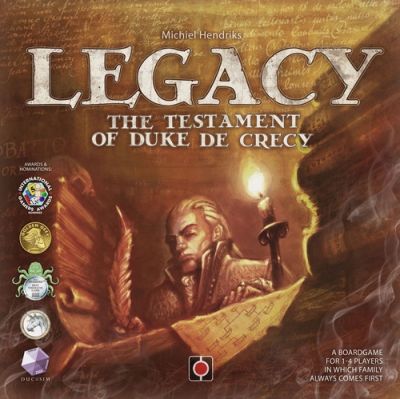 Add to Wish List
SKU
POR266428
€35.99
In stock
Details
Legacy is a worker placement game in which you take actions to improve the standing and/or wealth of your family. You will expand your family, creating an ever-growing tableau, the family tree. You will need to balance the three 'currencies' in the game, Prestige (converts to Honor points at the end of each generation, of which there are three), Income (your income which converts to hard cash at the end of each round, of which there are 9), and Friend cards (which are actual connections/friends, and are the only way to marry into wealthy/famous families, and can only be received through actions, such as marrying a woman who brings some of her social contacts with her).

Prestige, Income and Friend cards can be gained and lost. You can, for example, lose some prestige by marrying someone infamous or lose some Honor points (i.e. reputation) by asking friends for money. There are also numerous actions you can take that will affect one of the three 'currencies' detrimentally, such as bribing someone to get a title (for which you need to pay, but also in the loss of friends who felt they deserved that title, and not you), or the maintenance of a beautiful new park you have built for the people (losing you income). Finally, you can also take actions that result in the loss of some of your social contacts (friends), due to jealousy, or people simply no longer wanting to be associated with you.

These currencies are carefully balanced by the male and female friend cards in the game. Generally men will give you income and possibly prestige, but will cost you a dowry/wedding costs. Women, on the other hand, will give you connections (new friends you can choose from the current socialites (cards lying open on the table) and possibly prestige, and will sometimes even earn you a dowry!

The card interactions allow for multiple different paths to success, but you must choose your road strategically, planning out where you want to be headed, else you will be left behind in the dust by those with greater and more successful plans than yours.